Along with these benefits, builders and design teams across North America are finding mass timber construction may be a cost-cutting boon in an increasingly tight labor market.

As reported by BISNOW, one of its greatest benefits is that CLT saves money on labor, according to DLR Group Senior Associate Matthias Olt. 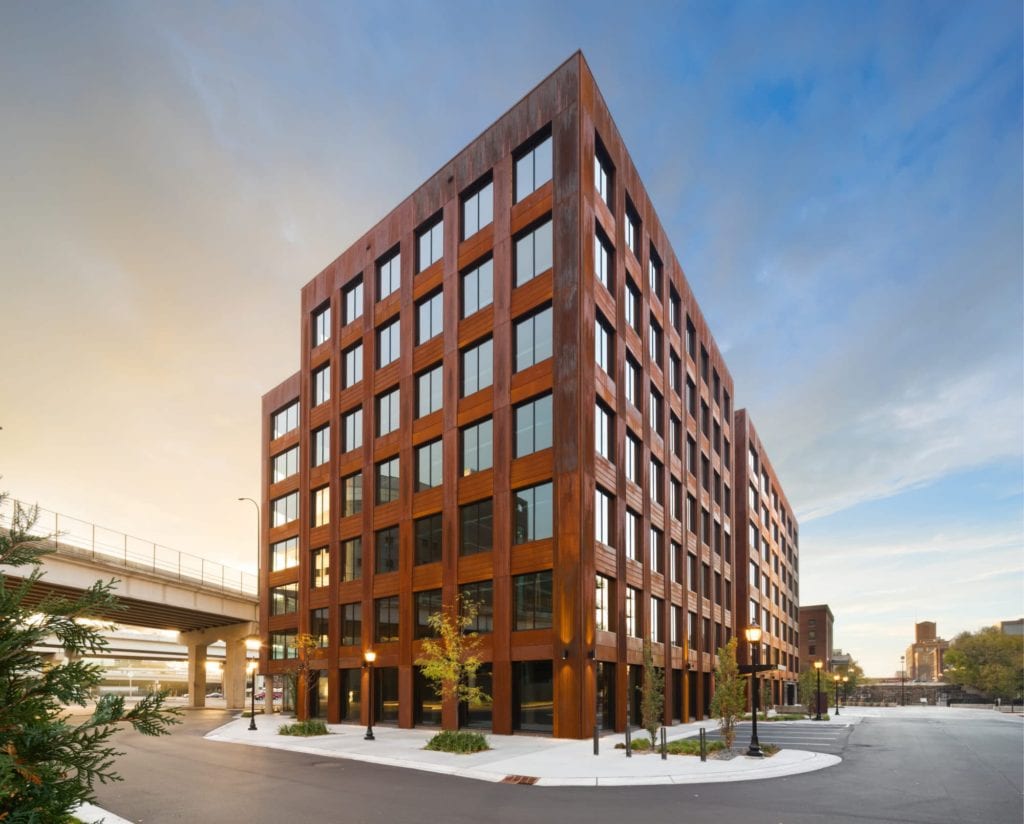 BE NIMBLE, BE QUICK Using mass timber can mean smaller crews and faster more nimble construction. T3 Minneapolis is the first in a series of taller wood buildings being constructed across the United States and was erected in just 2.5 months at an average of 9 days per floor. | Design Architect: Michael Green Architecture (MGA) | Architect of Record: DLR Group | Photo: Ema Peter Photography

Cross-laminated timber is not cheap. It is more expensive per unit than steel or concrete. The savings comes in reduced labor costs. The number of construction workers required on-site is cut in half

The DLR Group has been at the forefront of mass timber’s rise, as the architect-of-record for a growing number of taller timber towers across the United States including a series of office complexes: T3 Minneapolis, T3 West Midtown in Atlanta and two more on the boards, T3 Goose Island in Chicago and T3 in Denver. The Twin Cities’ inaugural 7-story mass timber commercial building, now housing a branch office for tech-giant Amazon, was erected in just 2.5 months at an average of 9 days per floor.

Builders are also getting in on mass timber’s advantages. Erica Spiritos, mass timber preconstruction manager for Swinerton Builders, notes some of the cost-cutting benefits in a recent article for the Puget Sound Business Journal.

“On the project for First Tech Federal Credit Union, we were able to achieve a four percent savings over a more traditional steel structure and delivered the structure four months ahead of schedule, because we simplified the interface with the building envelope, and because we had a lighter foundation, among other savings,” says Spiritos.

The 131-year-old commercial design and construction firm is leading the pack, recently completing three mass timber projects, along with four under construction. 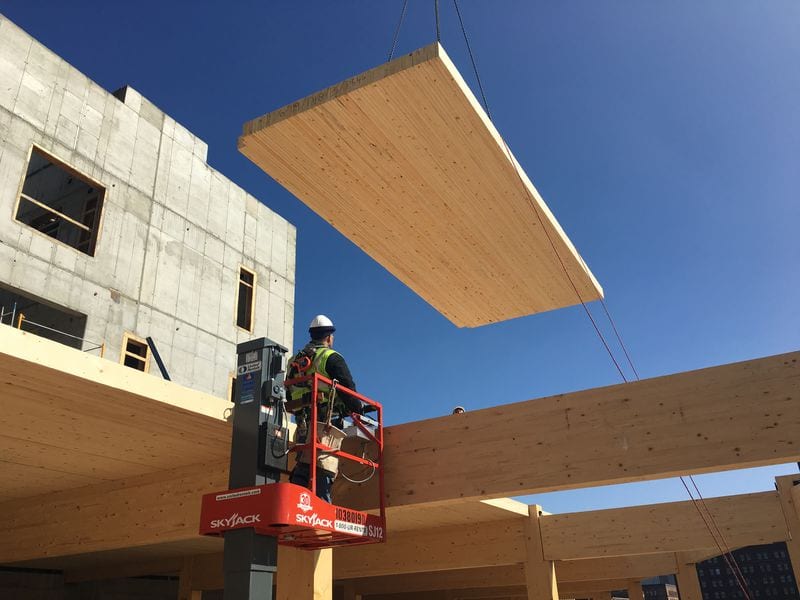 FOUNDATIONAL SAVINGS | Mass timber products’ light-weight advantage when compared to steel or concrete can often mean smaller foundations, helping to reduce a project’s overall cost and seismic loads. T3 is 30% lighter than its equivalent in steel would have been, and 60% lighter than post-tensioned concrete according to engineer-led fabricator StructureCraft who supplied mass timber for the project | Design Architect: Michael Green Architecture (MGA) | Architect of Record: DLR Group | Photo: Courtesy SturctureCraft Builders

The surge in mass timber and prefabricated wood construction, and recent changes in building codes to allow for taller wood buildings, is expected to not only save builders money but also contribute to new economic growth and jobs, a trend that is only expected to continue as more projects come on board.

According to one market research firm, the global cross laminated timber (CLT) market was valued at USD 603 million in 2017 and is expected to reach USD 1606 million in 2024, with faster construction time being a major driver. To meet this rising demand, forest-rich regions are expected to see a boost in job-related growth. One recent study by the University of Minnesota Duluth estimated that the creation of a larger mass timber producer could result in nearly 200 jobs statewide, along with indirect benefits in related industries[1].

[1] Economic Feasibility of Mass Timber Manufacturing in Minnesota, March 6, 2019, p. 35, The Bureau of Business and Economic Research (BBER) and the Center for Economic Development (CED) at the University of Minnesota Duluth, https://lsbe.d.umn.edu/sites/lsbe.d.umn.edu/files/bber-ced_mass_timber_full_report_for_distribution.pdf