Outside the Box: Modular Multi-Family Designs Are Turning Heads

Despite the pandemic-attributed decline in 2020, the modular multi-family housing market is anticipated to reach $25.35 billion in 2023 with a CAGR of 10.5%. In addition to rising housing costs and labor shortages, government incentives for sustainable, affordable housing will be key drivers of this growth.

For the AEC community, modular construction has many advantages, including efficiency and affordability. A report by McKinsey & Company revealed that modular systems can speed construction by as much as 50% and cut costs by up to 20%. Modular design also earns green points for the use of recycled materials, tight building envelopes, waste reduction and innovative building practices. But do pre-built pods or standardized building chassis always imply a sacrifice to design? We found four modular multi-family designs that will make you think twice. 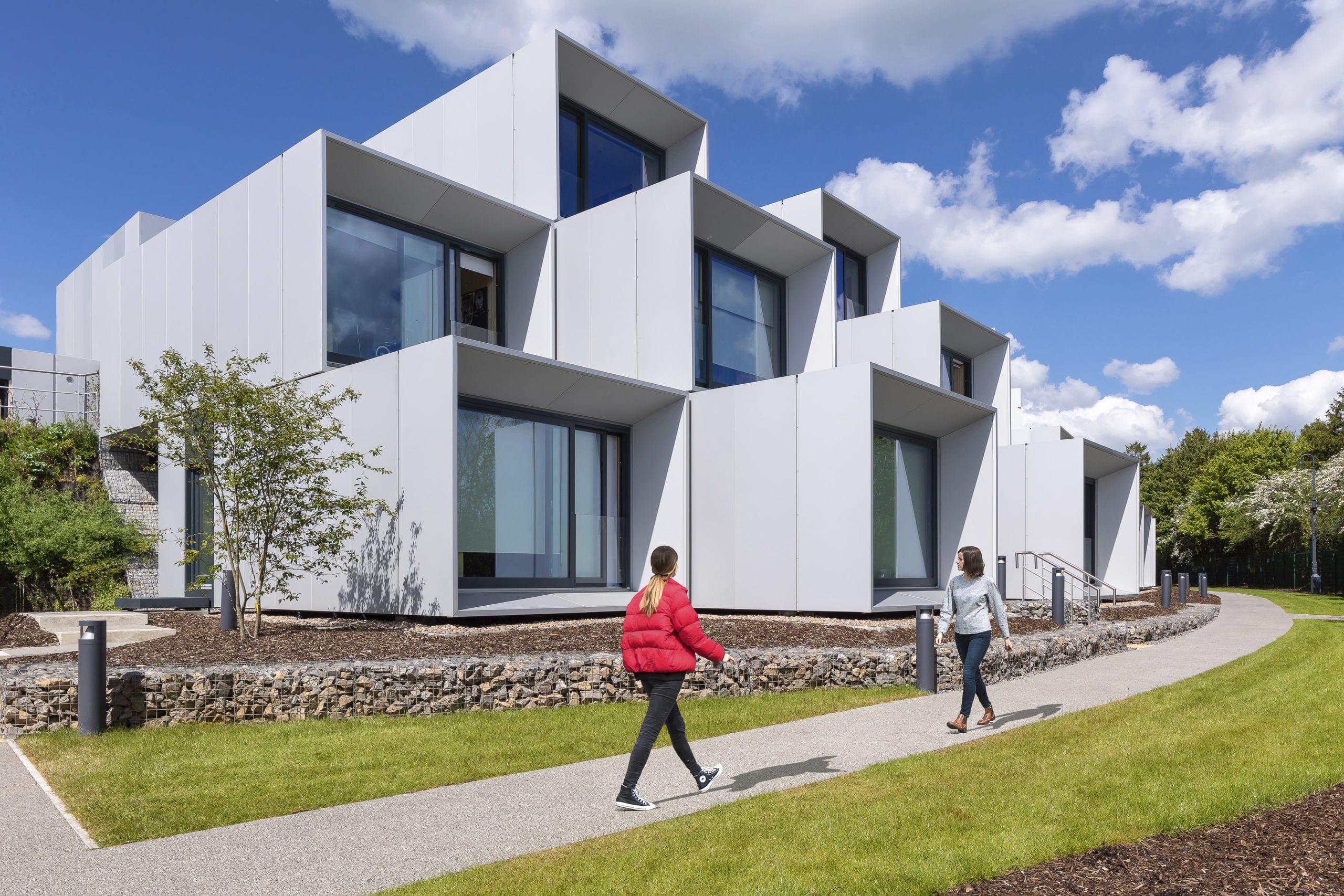 According to Architect Magazine, broader adoption of prefabricated construction has been hindered by the notion that “prefab modular construction generates lackluster structures that sacrifice what makes architecture vibrant and vital.”

Award-winning design firm Hickok Cole is challenging this perception through their internal research program ILAB. When asked the question, “what can modular be,” the Hickok Cole design team explored multiple massing studies using blocks from the popular game Jenga. The exercise revealed multiple ways that expressing the modules allows for unique architectural expression and controlled variety across a facade. 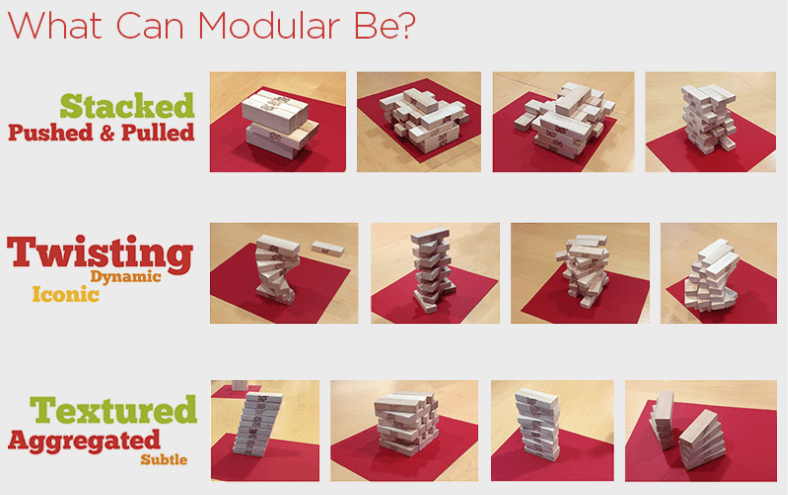 At the time of opening, Kirkland Avenue Townhomes was the largest publicly funded affordable multi-family housing project built with modular construction in Washington state. Designed by Seattle-based design firm, Schemata Workshop, The project provides fourteen 2-bedroom townhomes and four 3-bedroom flats for low income families and veterans. Nestled into a residential neighborhood, these modular, energy efficient homes are appropriately scaled to fit within the character and density of their surroundings. 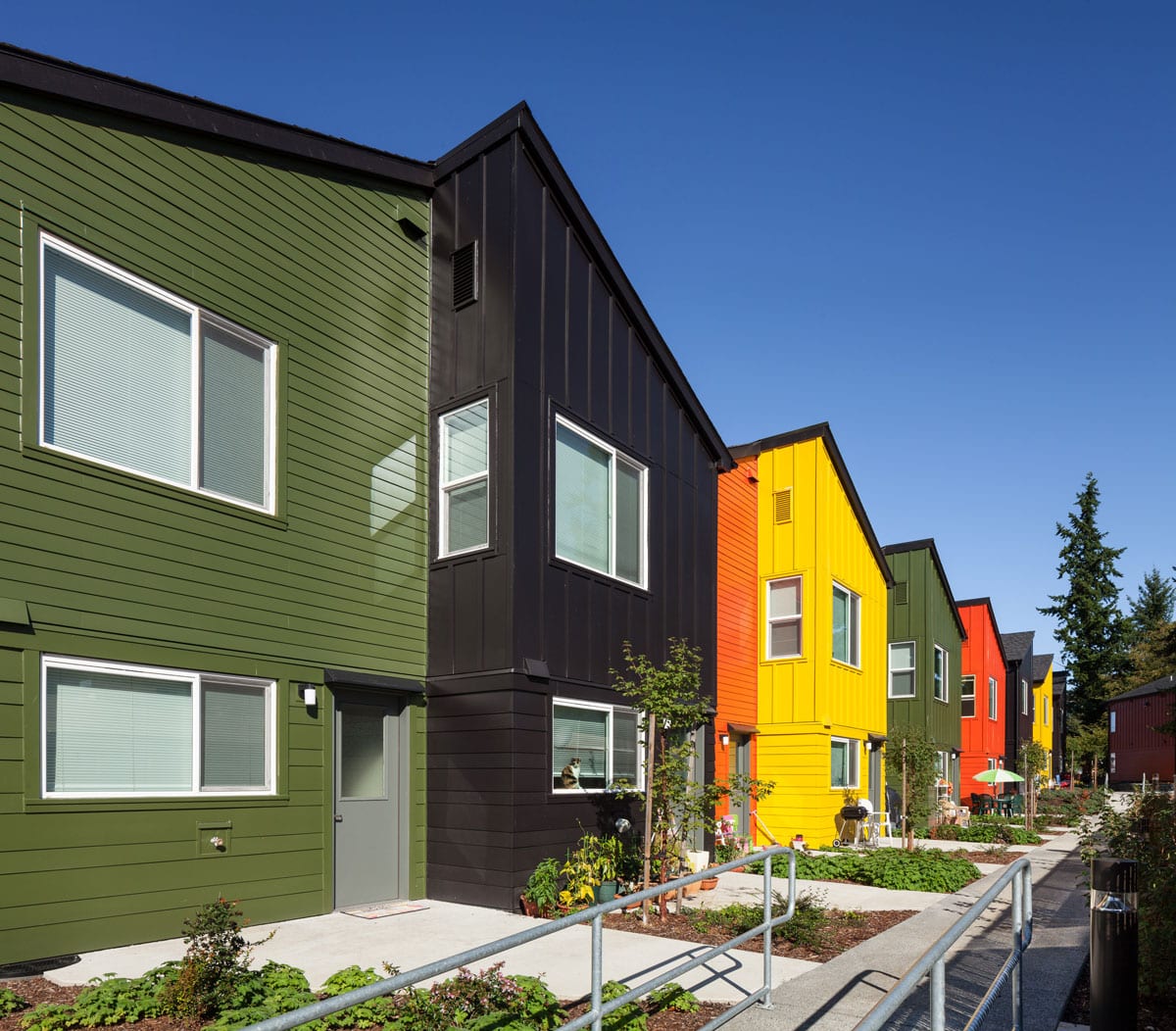 The interior layout features an open plan for kitchen, living and dining – offering ample daylight and cross ventilation. The exterior design celebrates its modular approach with a split gable featured at the 14’ module width.

The townhomes are offset 4’ to create a contemporary interpretation of the archetypal home structure. The project won the 2015 Governor’s Smart Communities Award and the 2015 New Modular Multifamily Design Award from the Modular Housing Institute. 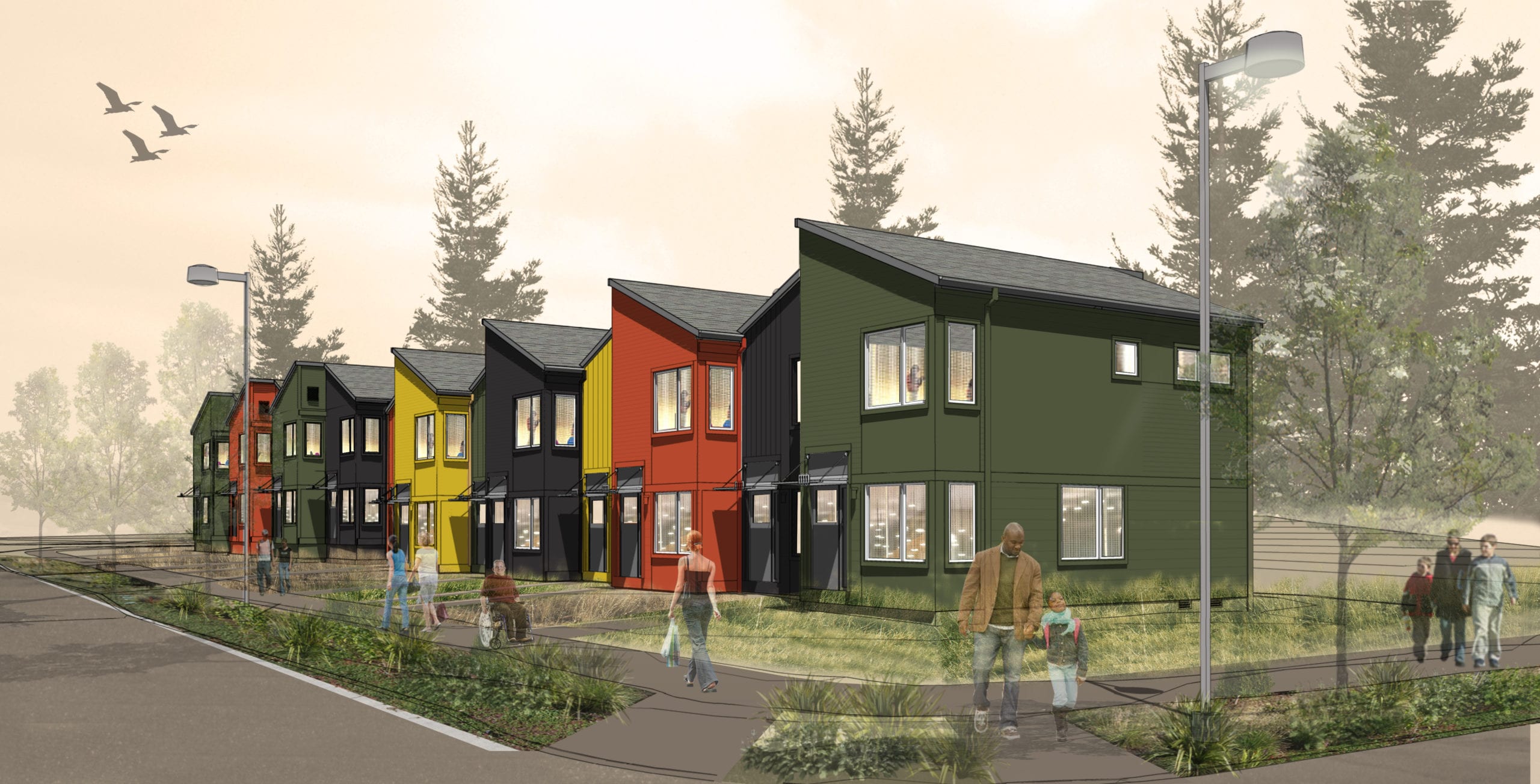 Modular is a great approach for affordable housing. It provides families with better housing choices, and a better chance for success.”

The Corner, from design firm ROSSETTI, was built on the historic site of Tiger Stadium, the beloved ballpark at the corner of Michigan and Trumbul in Detroit. Design imperatives for the project included neighborhood contextuality, active street frontage, good sight lines to the ball field, respect for the historic legacy of the site, contemporary aesthetic and efficient use of the site. The resulting 26,000 SF residential mixed-use development features three stories of 111 residential units over a retail podium, offering views to the reactivated ballpark, as well as vistas along the key axes. 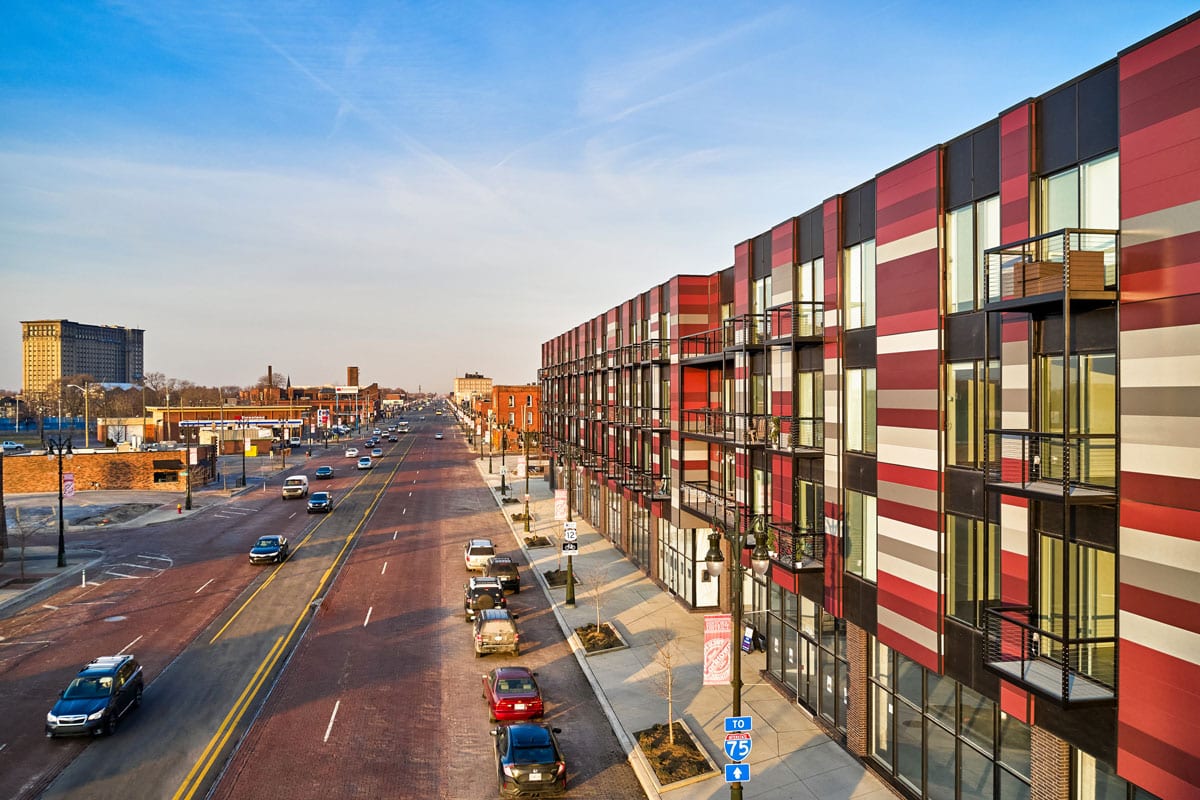 The Corner reframes antiquated ideas about modular construction through a striking design that is seamless and elegant from exterior to interior. Building designers used a mixed delivery system to take advantage of modular construction for the apartment units, while creating a customized design for units and first floor spaces that wrapped around the corner.

The 96 modules were delivered to and erected at the project site atop of the site-built retail podium. The living units were manufactured with the interior finishes including flooring, trim and doors. Start to finish, the modules were erected on the building podium in 21 days. 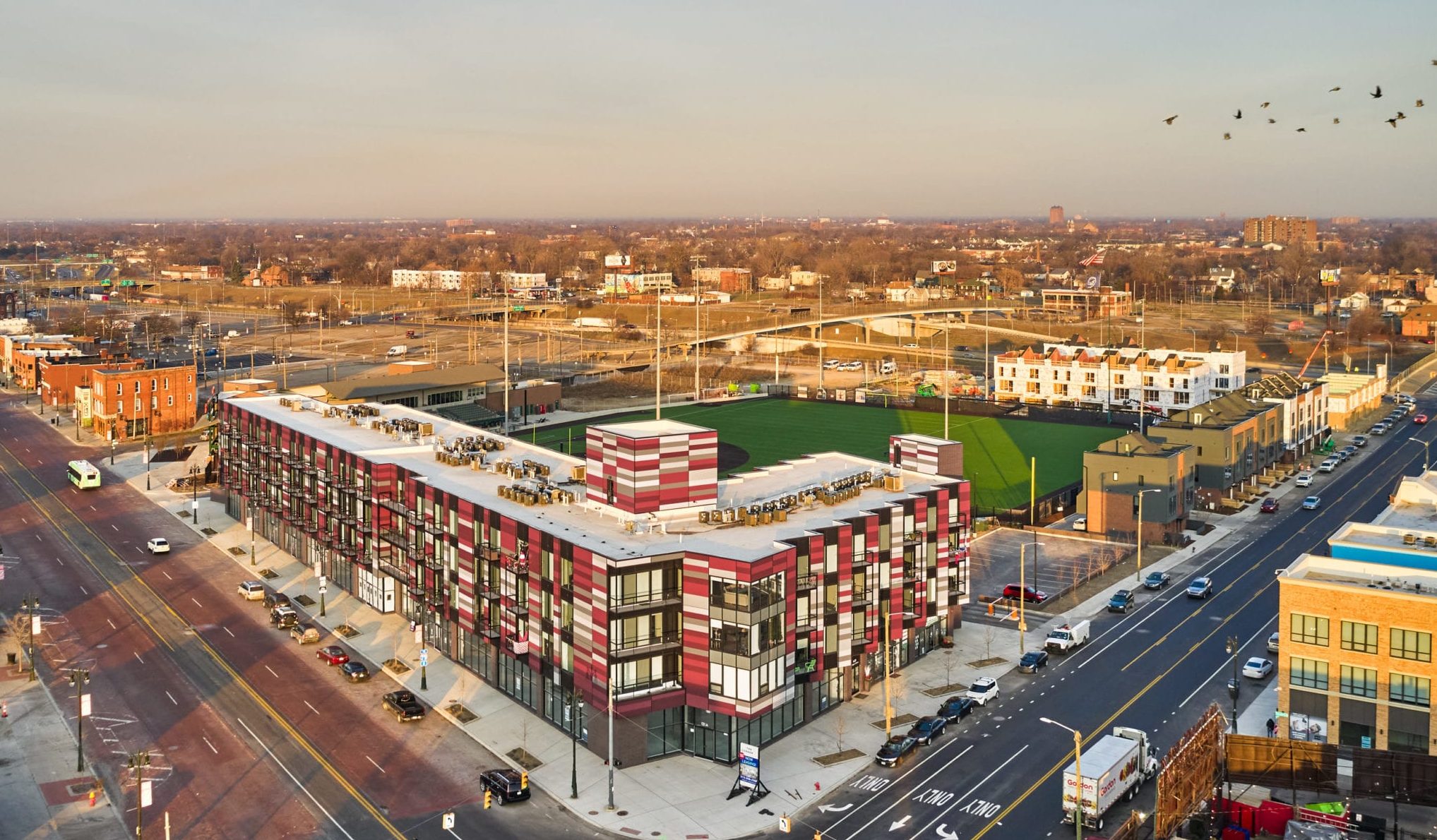 Architect WilkinsonEyre has been collaborating with Dyson for over 20 years, having originally designed the new Headquarters in Malmesbury, England in 1992. When concepting student housing for the tech innovator’s Institute for Engineering and Technology, WiklinsonEyre explored a range of modular construction systems and structural materials, eventually deciding on cross-laminated timber (CLT) panels. The panels are exposed internally, including in kitchens and bathrooms, and clad externally with anodised aluminium rain-screen panels and topped with a sedum roof.

The project’s offsite construction process included the installation of fitted furniture and storage, before transportation of the pods from Scotland to Wiltshire. The pods were stacked and angled to provide every student with a view from the large triple-glazed windows, while each pod retains a separate front door for privacy. While creating an informal residential character similar to a village, this layout also ensures the housing slots in with the landscape that is characterised by a raised bank. 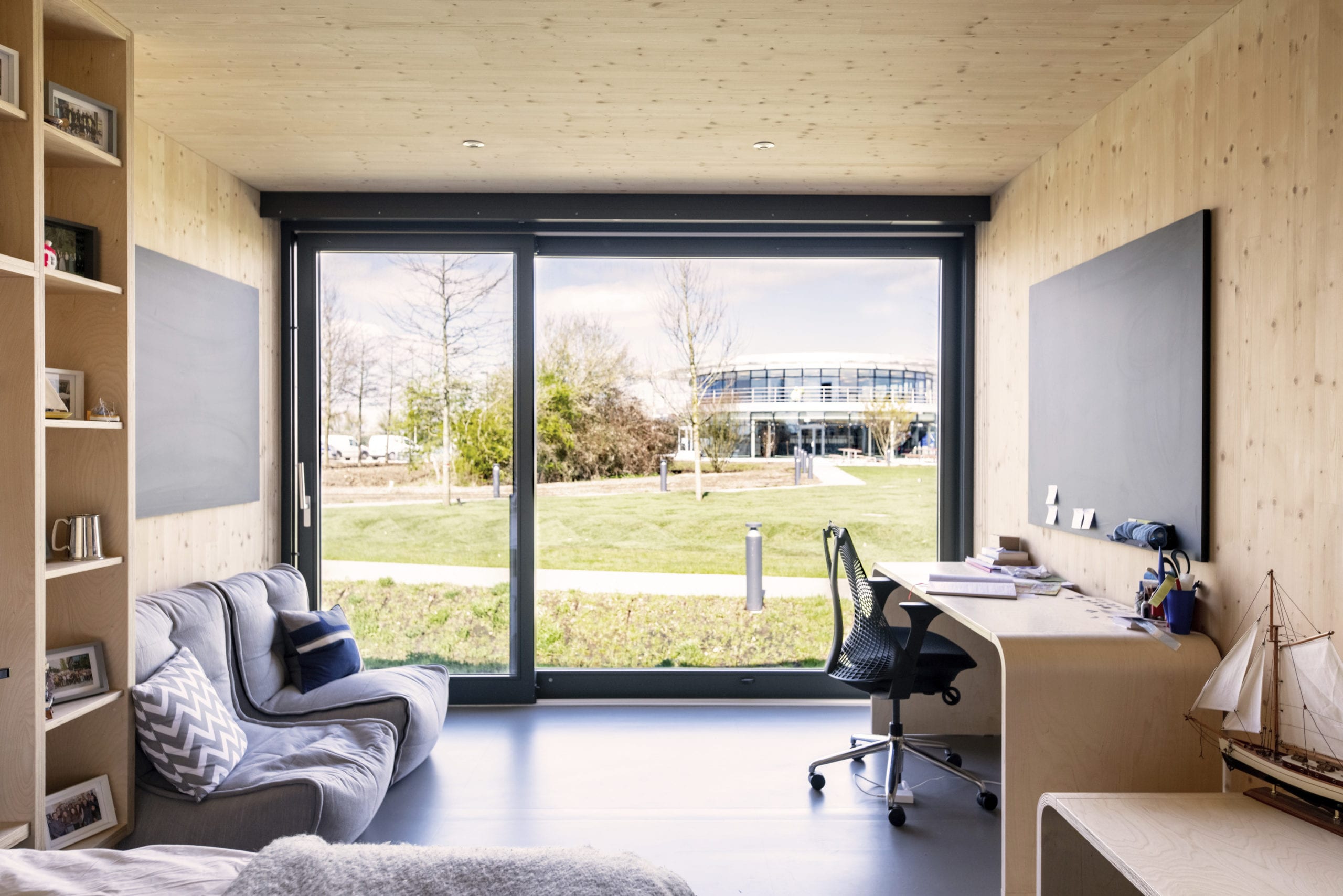 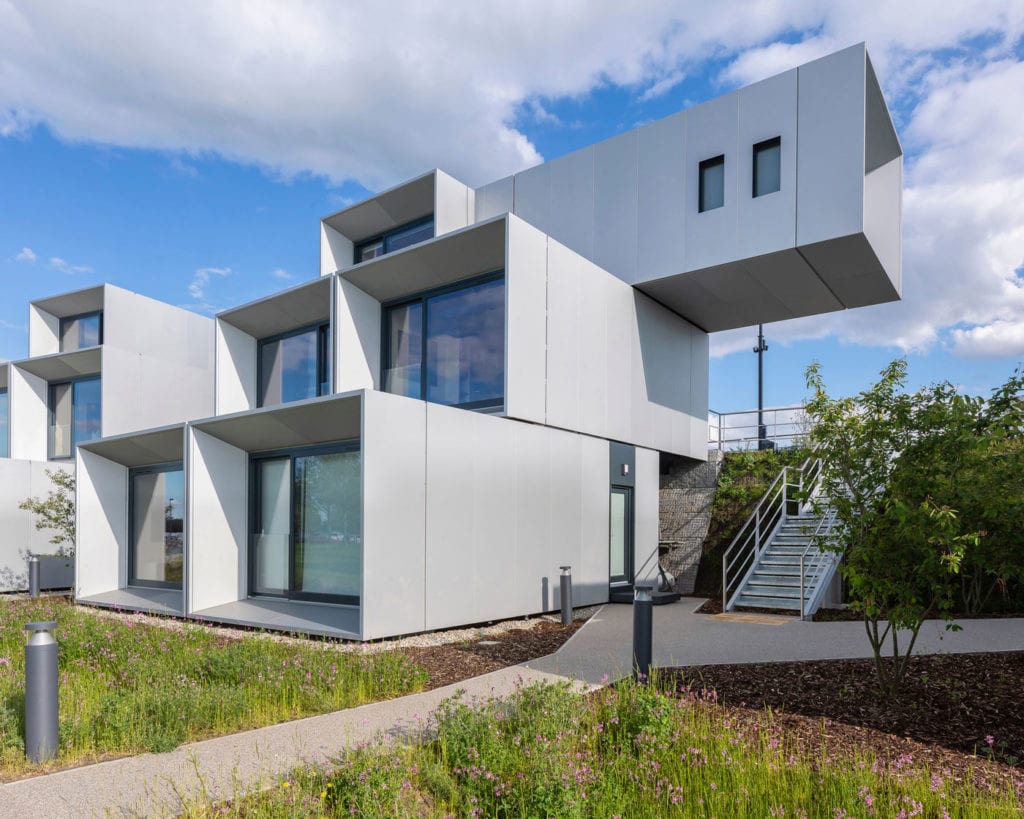 We wanted to demonstrate the beauty of modular construction. CLT pods were chosen to push the boundaries of the existing typology. CLT is a naturally highly sustainable material with strong structural qualities, making it an unrivalled choice.

The Rainbow Tree is anything but boxy. This cross-laminated timber tower, designed by Vincent Callebaut Architectures and planned for construction in Cebu City, Philippines, is inspired by and named after the rainbow eucalyptus tree found near its future home, which turns a rainbow of colors as it loses its bark.

The structure will include 1,200 prefabricated modules arranged in a geometric stack, each made from responsibly harvested mass timber. The building will include a central core and “exoskeleton” façade, with an exterior covered in a careful arrangement of over 30,000 plants, shrubs, and tropical trees sourced from neighboring forests. 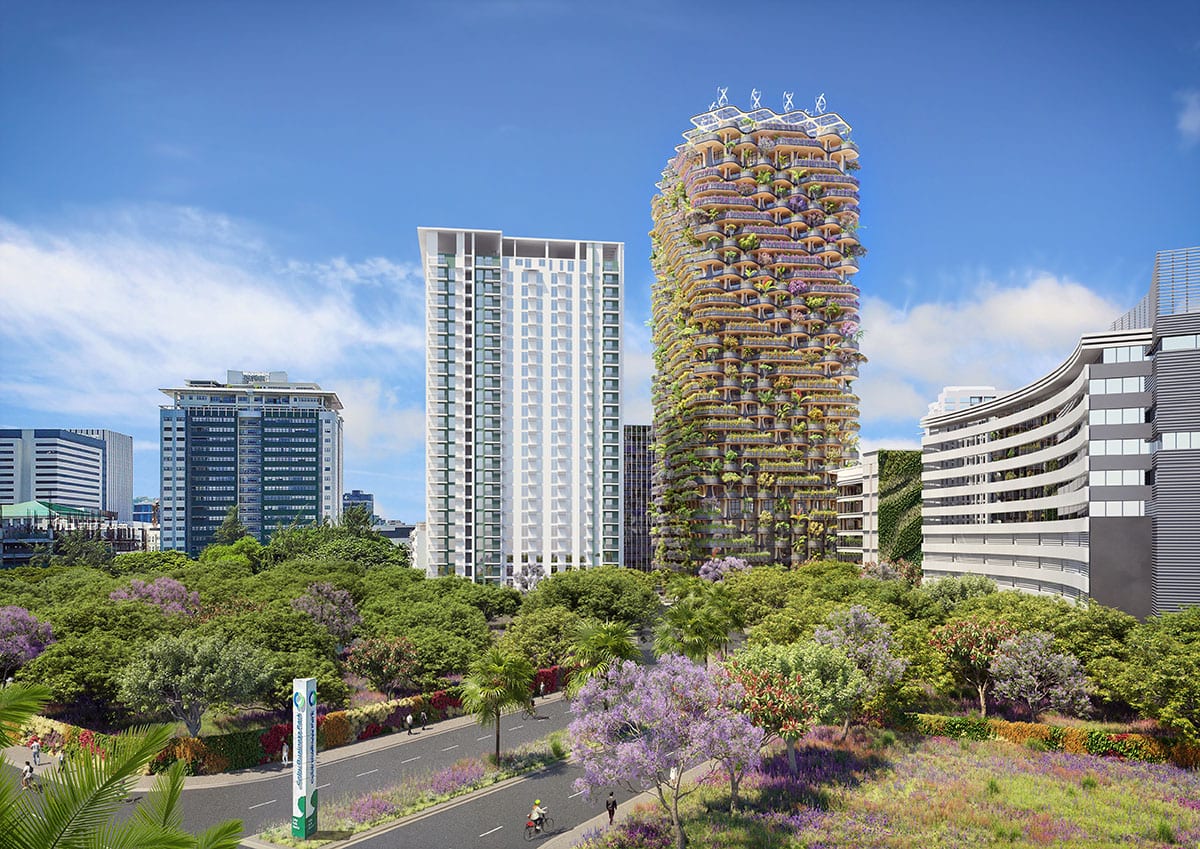 More than 100 basket-designed wooden balconies will be woven between the greenery, across black and silver cladding made from yakisugi wood, created by burning the surfaces of cedar wood planks.

The 115-meter high tower will reach 32 stories and will contain 300 apartment units, including mixed-use residential, condominium with retail and serviced apartments. The aim of the project is to construct a residential building with double environmental certification (LEED + BERDE) which offers the perfect balance between mixed cultural heritage and natural heritage of unparalleled splendor. 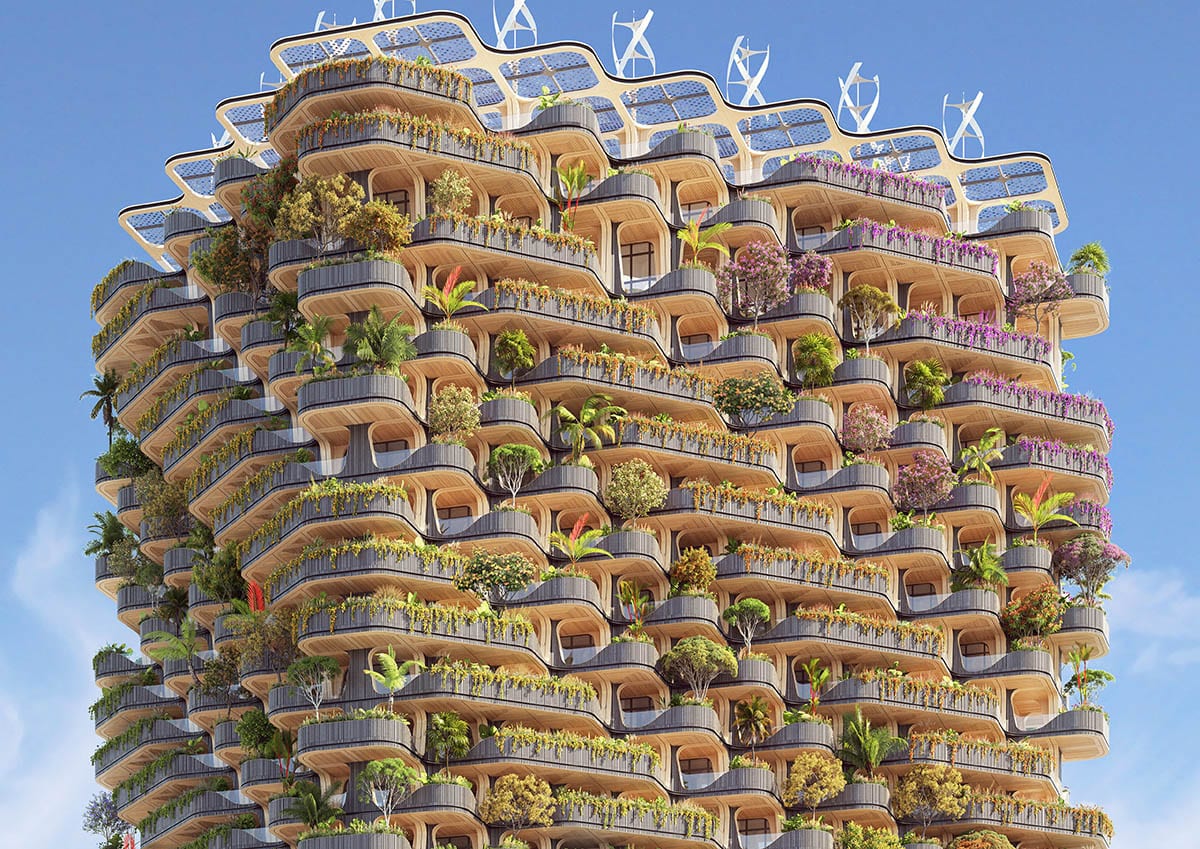