Why You’ll Want a Pergola and How to Build One

I’m very fond of trees, particularly because of the cool shade they offer on warm summer days. But, if you’re not blessed with a large tree near your deck or patio, one way to have that shady relaxing spot is by building a pergola. A leading authority in the do-it-yourself home improvement field, Ron Hazelton is the host of his own home improvement series, Ron Hazelton’s HouseCalls, now in its twelfth season. Ron walks through the basics of building a pergola.

Pergolas are by no means a new idea – they’ve been around since the middle of the 1600’s. Originally an Italian concept, they were soon adopted by the English whose Earl of Pembroke “watched the coursing of hares from a ‘pergola’ built on the downs” well before 1700.

Wood pergolas, especially when planted with vines such as rose, honeysuckle and wisteria, provide cool havens for entertaining and relaxing that feel wonderfully natural. These outdoor structures can be freestanding or attached to an exterior wall. If you’re limited on space, consider building a pergola over an existing patio.

Building a Pergola Over a Patio

Typically, pergolas attached to a house require a ledger, a board attached to the outside wall that provides support for attaching the pergola beams. It’s important that the ledger be securely fastened with lag screws or bolts, typically a half-inch in diameter. Usually the length of the bolt needs to be at least 4”-6″ to penetrate through the ledger board, the house sheathing and into the house framing.

The design possibilities are numerous, but, generally, the horizontal members or beams tend to be stacked in layers, with each layer perpendicular to the one above and below. The effect is a three-dimensional grid, of sorts.

Often, the beams, have an ornamental design cut on the ends. For consistency, a template is usually made to transfer a uniform shape onto multiple boards. A jig saw is the ideal tool for making the cuts.

In this case, the supporting posts will sit on the existing patio. As you’ll see metal post bases are attached to the patio with expansion bolts. The brackets secure the posts in place and raise the bottoms off the patio surface preventing moisture from wicking into the post ends.

Since this is an outdoor structure, it’s important that all fasteners be rust-resistant. They can be coated with a protective layer of zinc (galvanized), treated with other rust-inhibiting material or be made of stainless steel.

Building a pergola is a two-person job since long planks need to be lifted into place and held securely. Adjustable c-clamps can be very helpful when it comes holding beams in position while fasteners are being installed.

A wood pergola is like an outside room combining comfort with the feel of the outdoors. There is something calming and peaceful about relaxing beneath such a natural structure. Should you decide to build one, I promise you’ll be very glad you did. 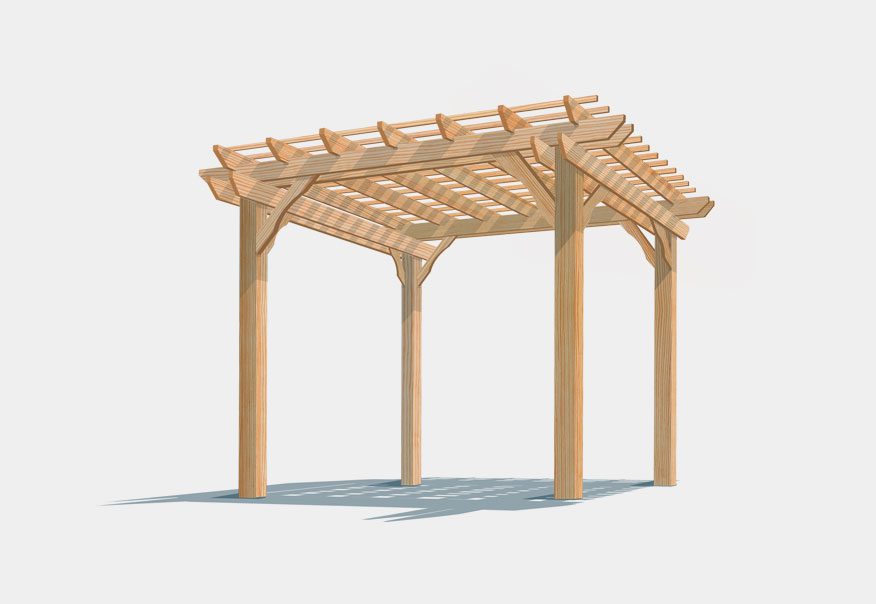 Ron is the founder of the online destination www.ronhazelton.com. He’s an enthusiastic supporter of the Internet and believes it to be the ideal medium for delivering on-demand, how-to content to home improvement enthusiasts.