Wood on the Rise: Top 5 Trends in 2019 for Building with Wood

From soaring new heights to smarter cities, here are some of the top trends ushering wood into 2019… 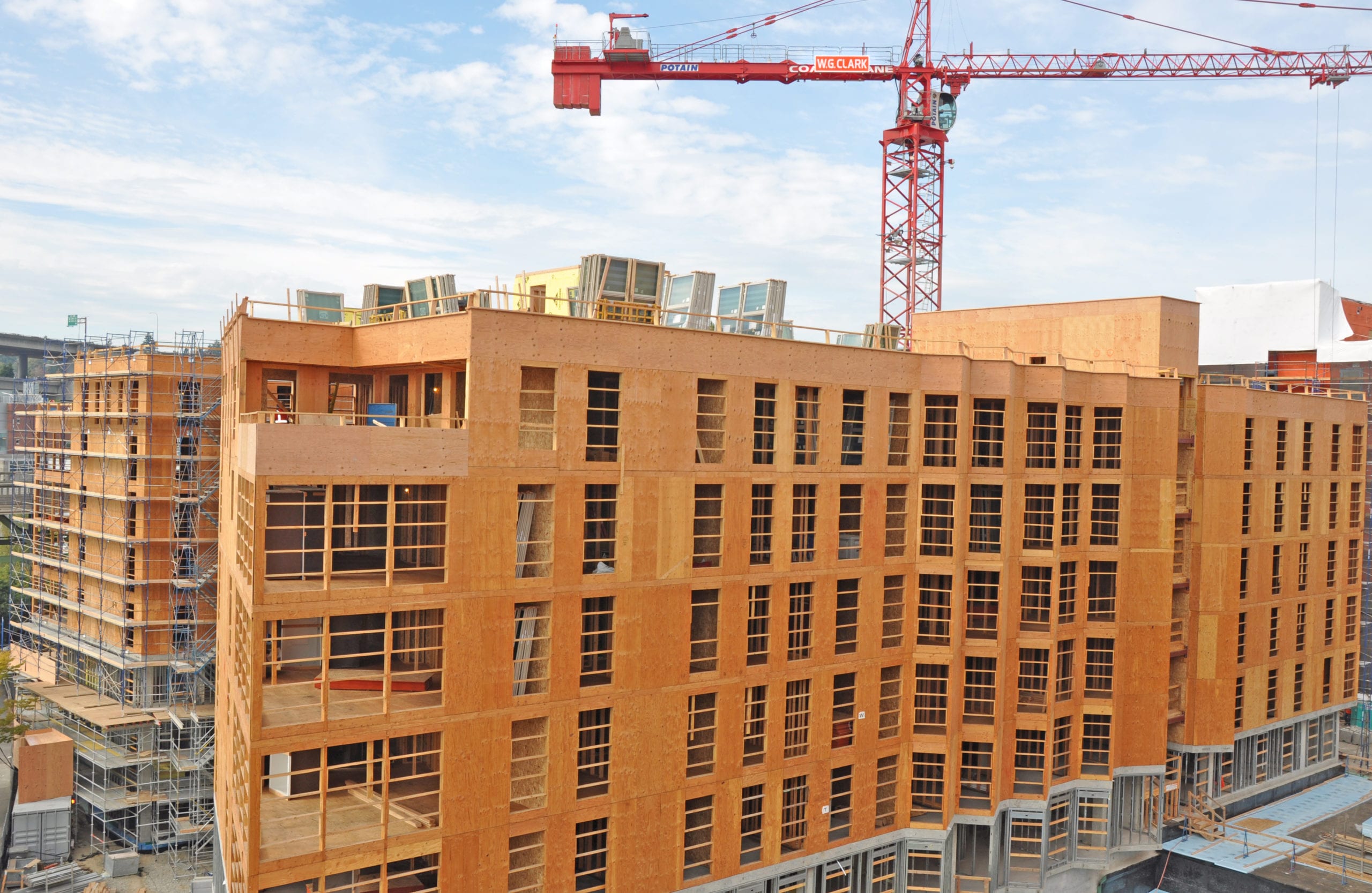 Building Up in the U.S. Wood construction and innovation continues to soar in the U.S., where taller wood buildings are about to become more common. Preliminary voting results released by the International Code Council (ICC) in late 2018 approved 14 tall mass timber code change proposals, clearing the way for their inclusion in the 2021 International Building Code (IBC).

Some cities are already on the leading edge of the mass timber movement. Seattle for example is a textbook case in building with wood in dense urban environments. Earlier in 2018, the City of Seattle began accepting permit applications for developments that use mass timber in heavy timber building types up to 18 stories tall.
These allowances are capturing the imaginations of top designers and engineers. DLR Group, Martha Schwartz Partners, Fast+Epp, Swinerton, WoodWorks, and Heartland created a feasibility study called ‘Tall with Timber: A Seattle Mass Timber Tower Case Study’ which presents a 12 story concept design for a mixed-use mass timber tower in Seattle.

It’s clear that the mass timber movement is growing as U.S. building codes evolve to include safe, sustainable and versatile ways of building up.

Mjøstårnet, which is the world’s tallest timber building, won 2018’s Norwegian Tech Award in the Building and Construction category. The world-record breaking project is a milestone for innovative timber construction. Contributed by Moelven

Mass timber is reaching new heights around the world.
So far, Norway has the highest ambitions with Mjøstårnet. Located in idyllic Brumunddal, it is the world’s tallest timber building.

At 280 feet – 18 stories tall – Mjøstårnet has a combined floor area of around 122,000 square feet, including apartments, a hotel, offices, restaurants and common areas. There will also be a swimming hall. The columns are fabricated at the world’s oldest glulam factory and assembled on site.

It is one of a number of tall wood buildings built around the world over the past several years, demonstrating successful applications of new wood and mass timber technologies.

As for the future, the sky is the limit. Sumitomo Forestry, which is headquartered in Tokyo, is preparing the concept plan for creating a 350-metre-tall, 70-story wooden high-rise building in 2041. The plan is to build a hybrid wood and steel structure made from 90 per cent wooden materials.

Smarter Wood Cities on the Horizon

Mass timber is the building material of choice for the Google-backed smart city design Sidewalk Labs has proposed for Toronto’s Quayside neighborhood. Contributed by Sidewalk Toronto

What will a smart neighbourhood look like? Sidewalk Labs has a vision for Canada’s biggest city and it’s banking on wood.

The company – an offshoot of Google parent Alphabet – has released its draft plan for Toronto’s Quayside, on the Lake Ontario waterfront. It proposes to improve city living through a one-two punch of tech and timber.

Sidewalk says it will use tall timber technologies on an unprecedented scale, even exploring what it would mean to build Quayside entirely out of tall timber. Building a neighbourhood from locally-sourced wood products shows the benefits of wood, including the reduced carbon footprint, flexible modular design and improved affordability.

As for the tech, Sidewalk has been letting its imagination run wild: energy managed by an AI-run system; streets that can melt snow built with driverless cars in mind; sidewalks that transform to cater to cyclists, pedestrians or events; and many more futuristic ideas.

If successful in Toronto, it’s expected to be replicated elsewhere in the world. Newer to the US market, dowel-laminated timber (DLT) has a bright future.

Unlike other structural timber, DLT does not use glue, nails or other metal fasteners. Instead, it uses wood dowels to join laminations. A variety of species, including SPF, Douglas fir, hemlock, Sitka spruce, and western red or yellow cedar can be used to manufacture it.

It’s already commonly used in Europe and is gaining traction in the U.S. for its ease of use with computer-controlled machinery. Its all-wood composition also makes it stand out.

DLT allows for significant architectural flexibility and is well-suited for one-way spans.

For example, 111 East Grand in Des Moines, Iowa, will be the first multi-story office building in North America to employ DLT. The four-story building located two blocks from the Des Moines River, is a total of 65,000 square feet. Spruce glulam beams and columns frame the DLT panels that serve as floors and roof. The system facilitates a quick build and a smaller site crew, minimizing the disturbance to the neighborhood during construction. Prefabricated buildings are at the forefront of innovative construction techniques.

While the type of construction is not new, it’s becoming a game changer for building faster and in a way that’s less wasteful and more cost-effective. Prefabrication’s reputation as an affordable and efficient way to build multi- story residential and commercial projects is growing around the world.

Fabricating wooden assemblies off-site at a factory makes the process much more efficient. Once the prefabricated components are on site, a building can go up in days rather than months.

In 2019, prefabricated buildings will continue to make strides towards mainstream adoption across building segments.