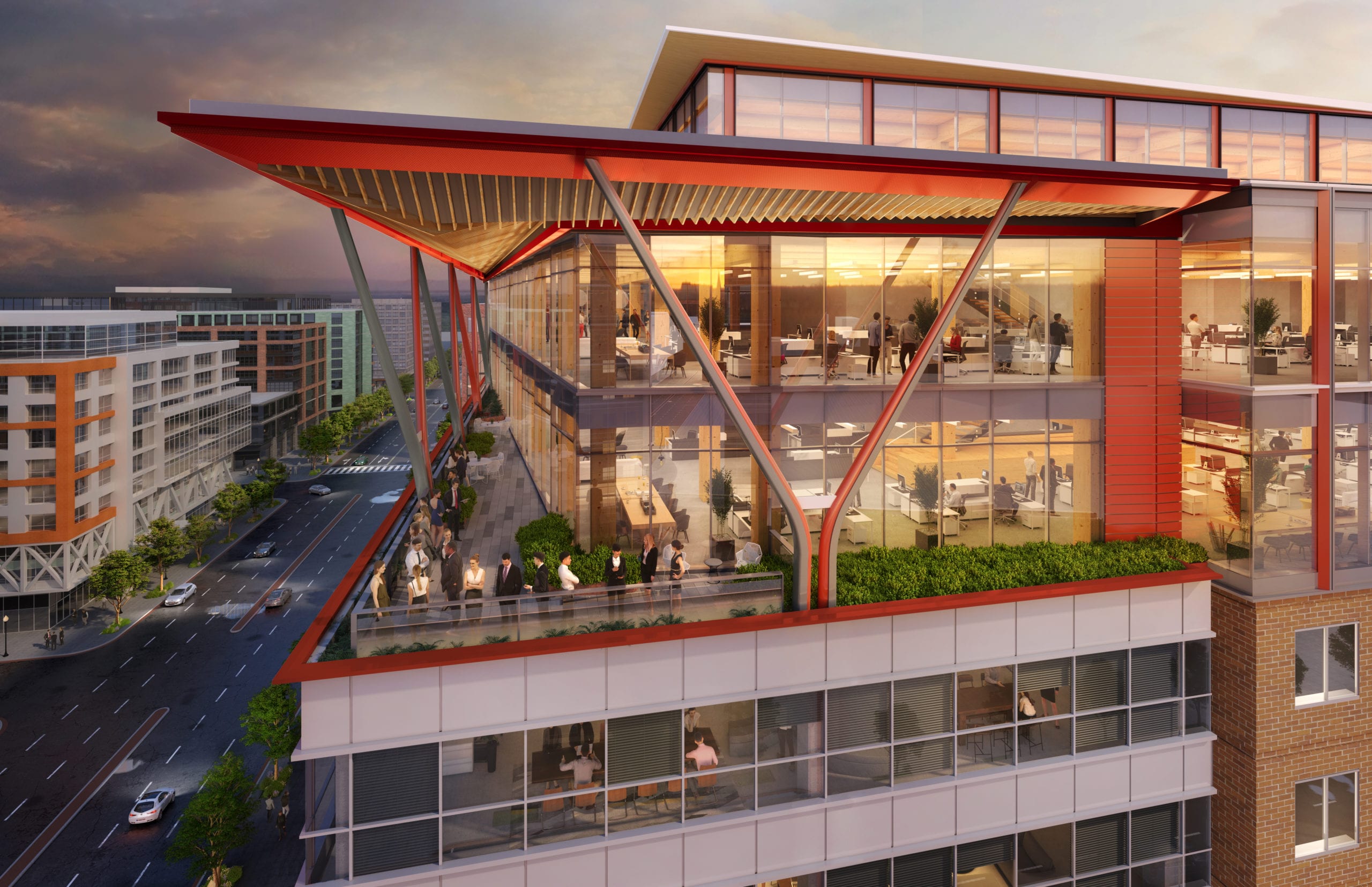 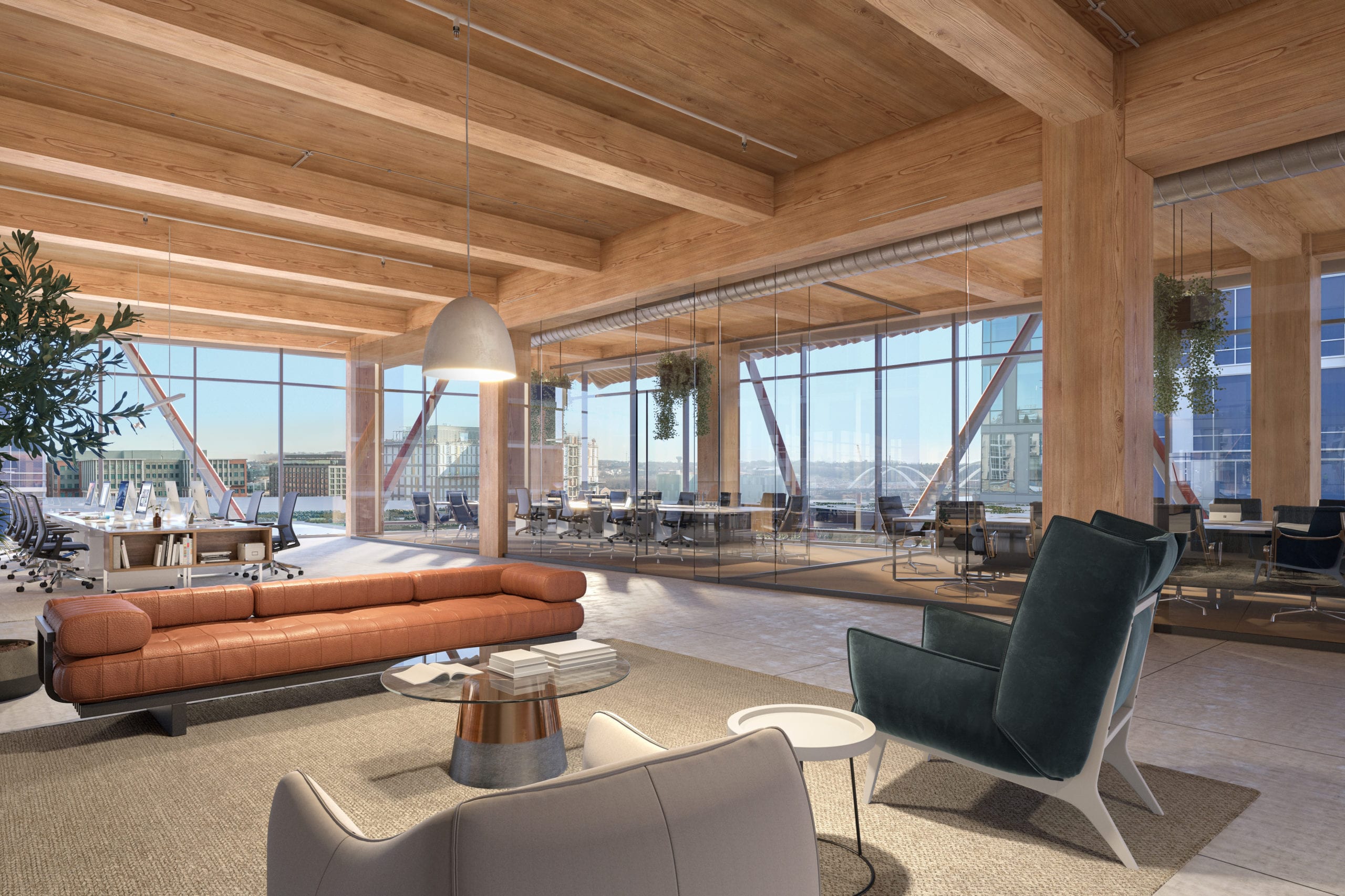 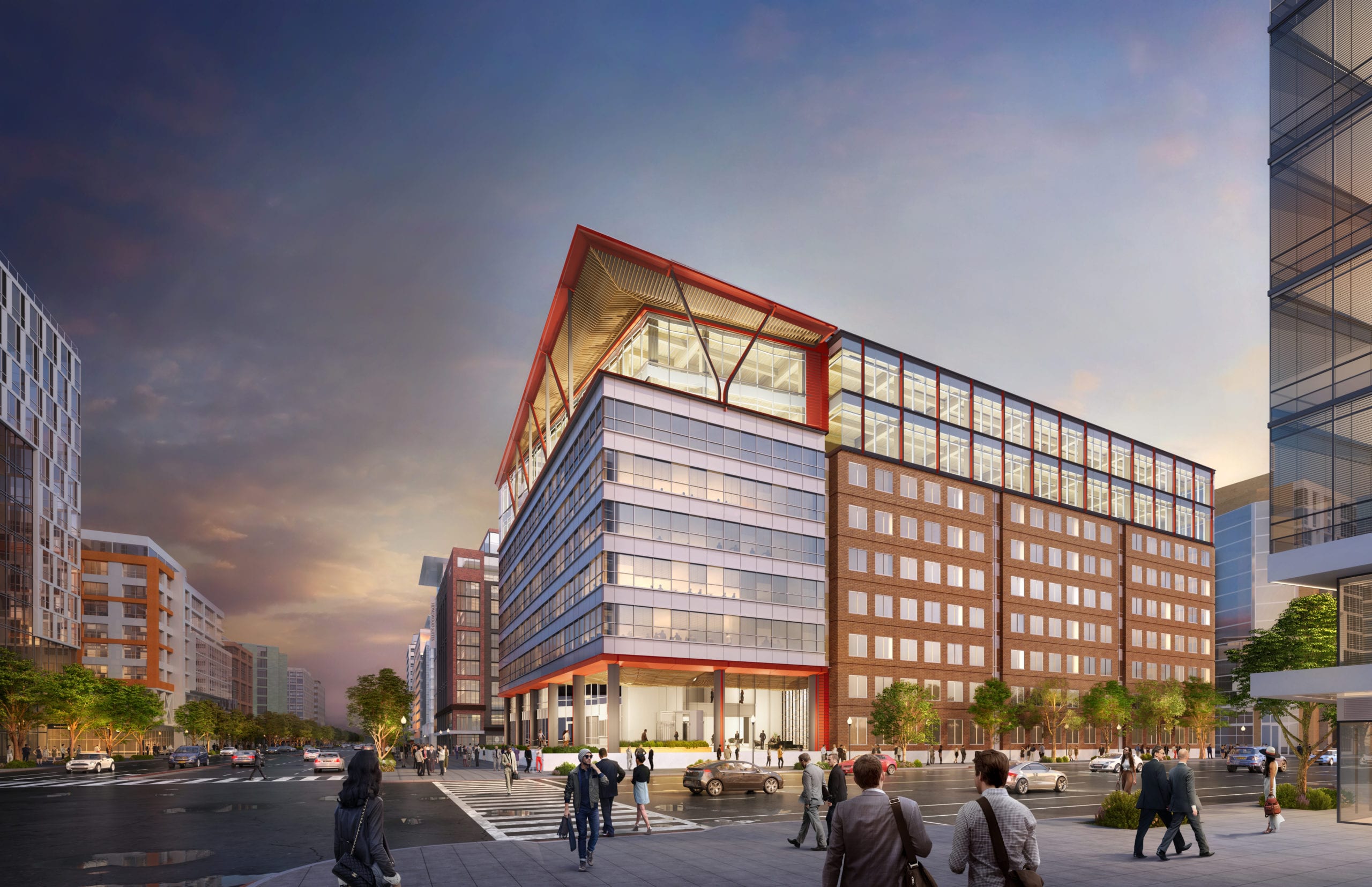 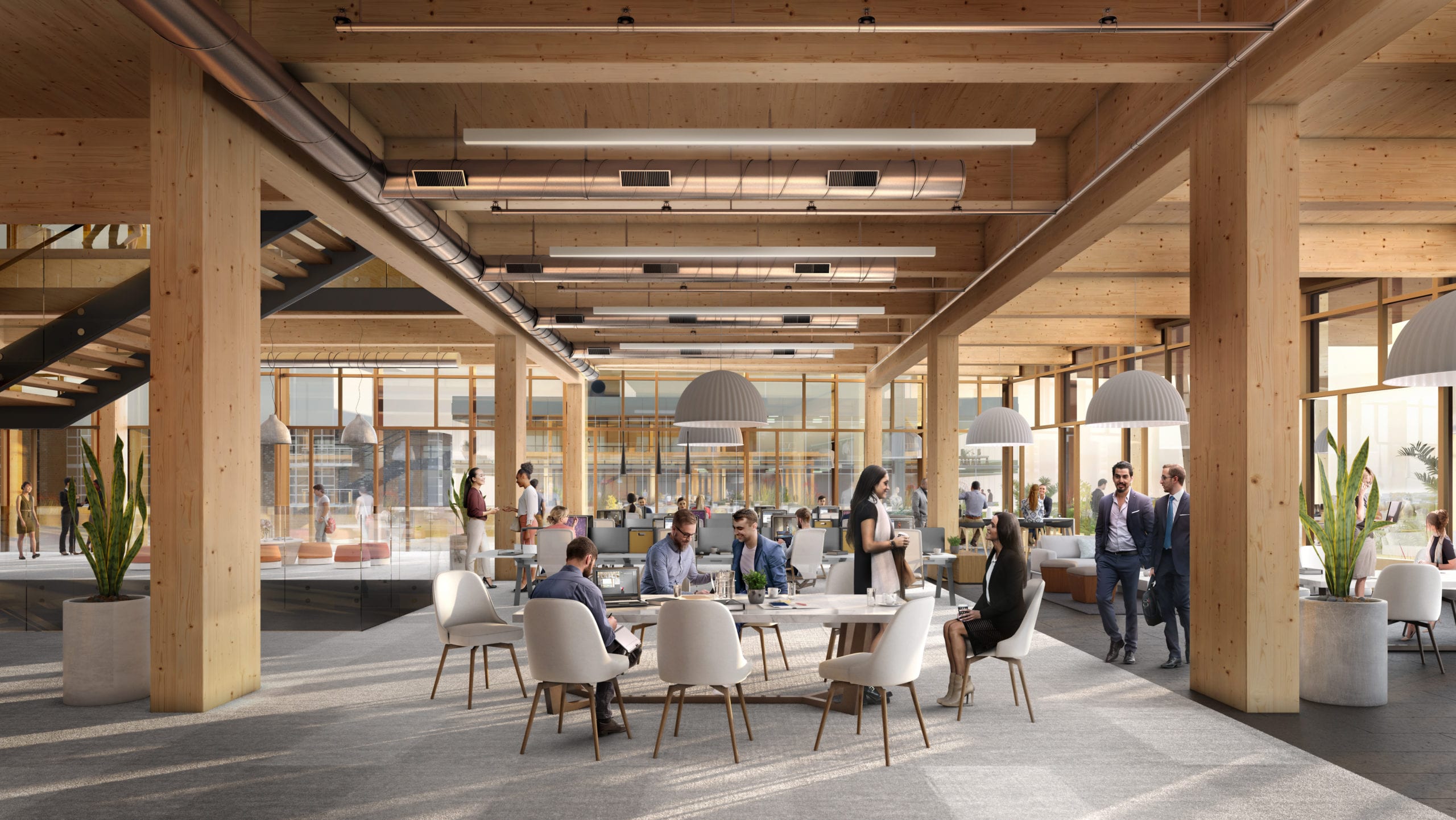 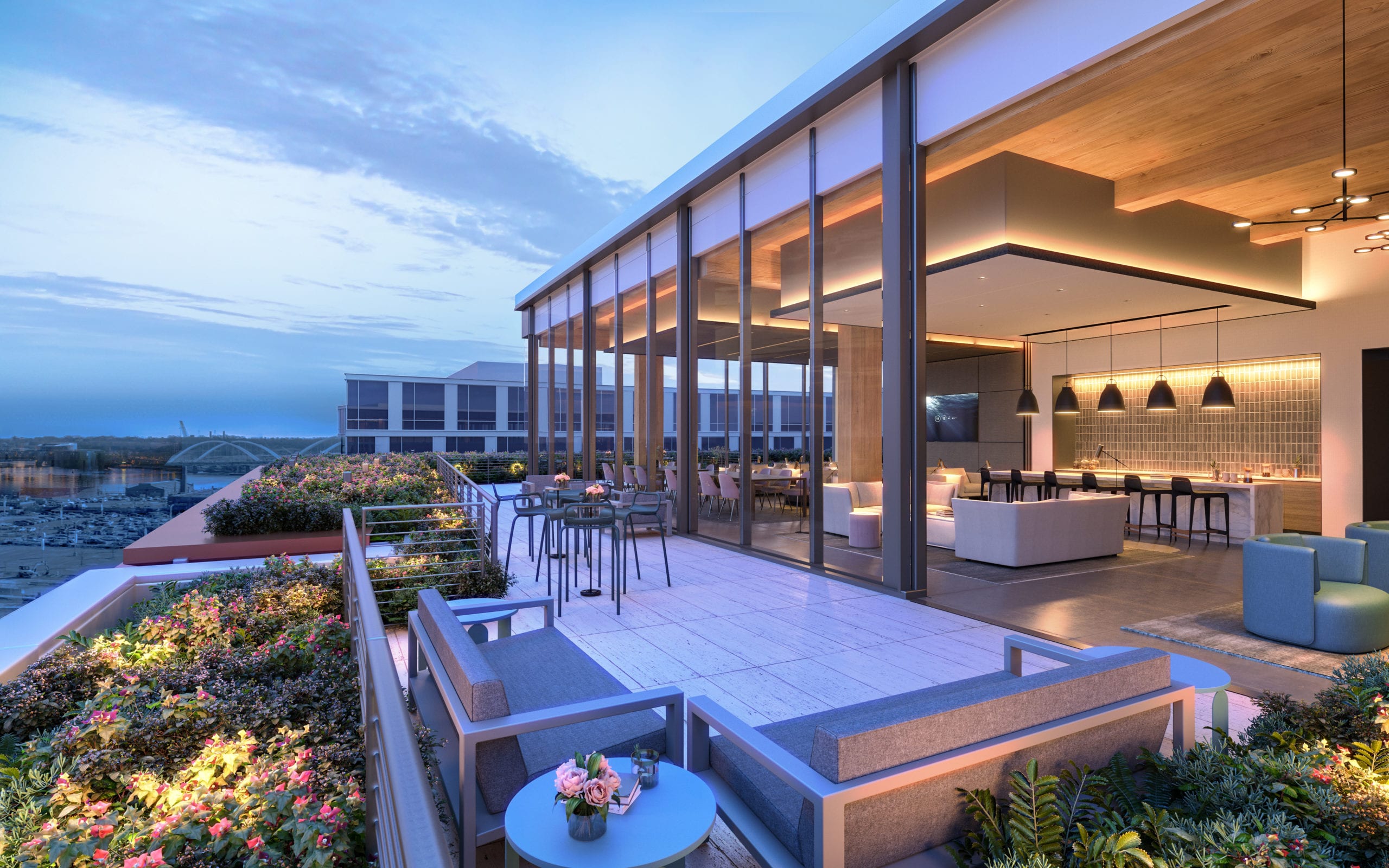 As vacant parcels become harder to find in densifying urban centers and business districts, developers are looking at vertical expansion through overbuild construction.

Like most major metropolitan locales, density tends to rule real estate investments in Washington D.C.’s Capitol Riverfront neighborhood. In addition to land scarcity, the city’s building codes limit structural height to 130 feet, compelling builders to make the most of every foot.

Office space, however, has become commoditized and homogeneous in this historic Navy Yard community, driven in part by the dominant legal, government and compliance sectors that have historically opted for more traditional building designs. For developer Columbia Property Trust, this presented an opportunity to differentiate their latest overbuild project, 80 M Street.

Building Up and Standing Out

Originally built in 2001, 80 M Street was among the first office buildings in what would eventually become the Capitol Riverfront District. In 2016, the building underwent a $3 million renovation and landed WeWork as a major tenant. At a current height of 90 feet (seven stories), 80 M Street was a perfect candidate for vertical expansion, but also needed to appear unique in the District’s crowded commercial market. To accomplish both goals, architect Hickok Cole chose mass timber for their 100,000-sf overbuild — a first of its kind for the city and the design team.

“We’ve seen buildings across the market trying to differentiate with bigger, better amenities like rooftop decks, gyms, conference centers, lounges,” said Pat Keeley, senior vice president at Columbia Property Trust. “Now that most buildings have those amenities, we’re looking for the next level to stand out.”

“We wanted to bring something new to the market — something that would set the space apart,” said Thomas Corrado, senior associate and senior project designer, Hickok Cole. “We’re a concrete city, so we wanted to see how we could introduce mass timber into the D.C. marketplace as a viable building system.” 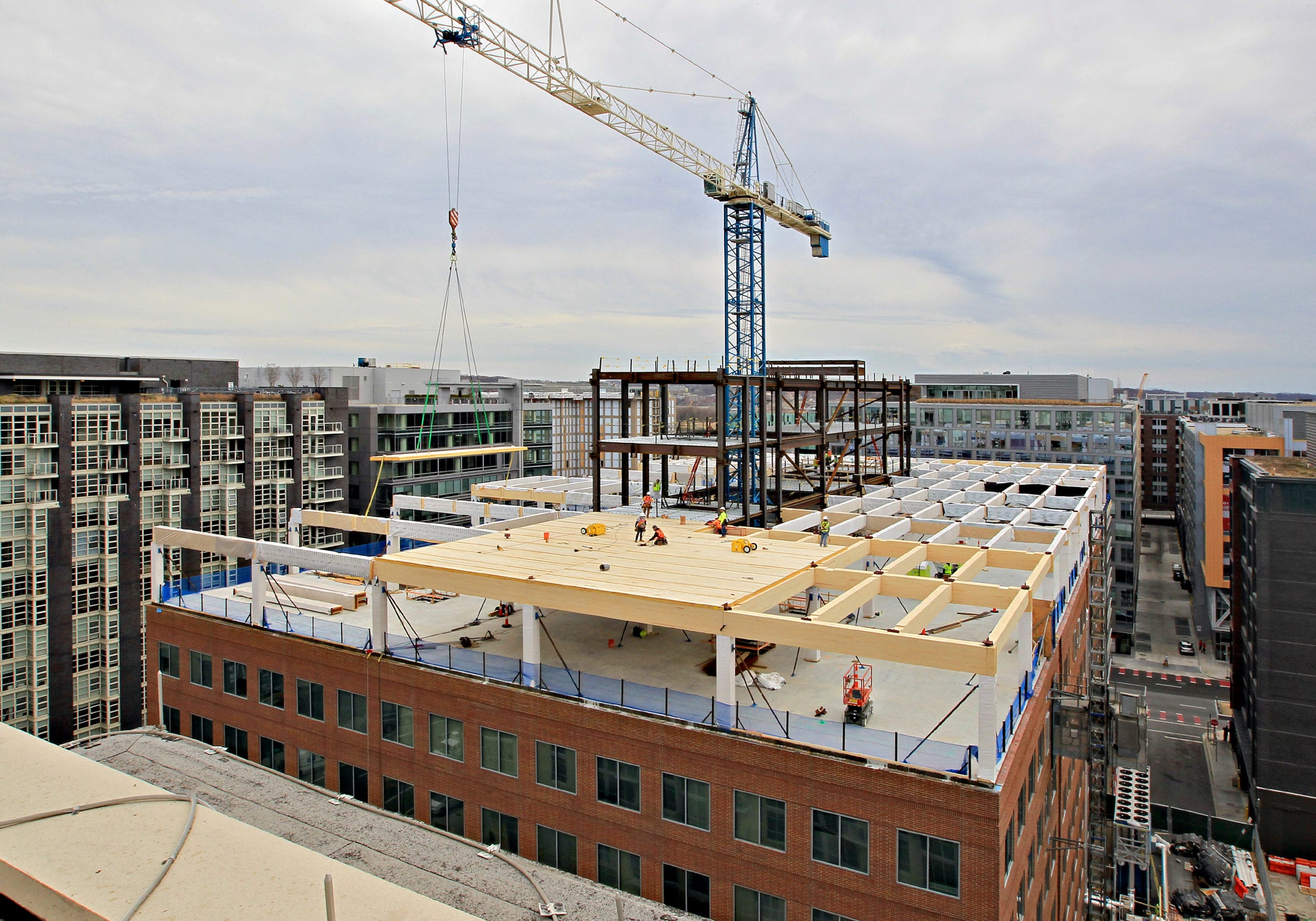 The design team’s decision to use mass timber was driven by a number of factors — chief among them was timber’s light weight. According to Corrado, the existing building could not handle the load of a traditional concrete overbuild. “We would have had to beef up the existing structure below, which would have been extremely expensive and disruptive to the tenants,” explained Corrado.

Timber’s light weight also proved advantageous by allowing the team to deliver the project faster as well, with less impact to the occupied building. The team built an innovative interstitial layer using steel, thereby providing Hickok Cole the opportunity to work from a clean slate, which is not traditionally seen with mass timber, and to incorporate Type IVC construction on top of Type IA.

“The use of Type IVC construction with some components of Type IVB construction was a unique hybrid approach,” said Jason Wright, associate principal and senior project manager, Hickok Cole. “ If we had to cover up a percentage of the timber as required by IVB, we would have lost that market value.”

Despite the traditional drive for density, 80 M Street will measure just shy of DC’s allowable height limit of 130 feet, with fewer floors and higher-than-average vertical depth. “The decision for this design,” Wright says, “was a strategic one.”

“Columbia recognized the increased marketability of having 16 feet floor-to-floor with mass timber instead of 9.5 feet floor-to-floor with concrete,” said Wright. As a consequence of the taller ceilings, the overbuild’s depth of light penetration is extended by almost 200% compared to a typical office space. “They left some density on the table to do it, but they believe there is payback there.”

“Developers are starting to see that it’s not always about density,” said Corrado. “We’re going to have to start putting different spaces out there for people to live in and to work in, and I think timber goes a long way in doing what steel and concrete just can’t deliver.”

“If you squeeze as many floors into 130 feet of height as you can, that’s probably an equation for a horrible investment strategy,” added Keeley. “Creating engaging places where people want to work and live or socialize — that’s the key. And mass timber is something that helps you create that kind of environment.”

Once completed, the overbuild will add two full floors of trophy class office space atop the existing 286,000-square-foot building, as well as an occupied penthouse level and rooftop terrace for social space. The existing lobby will also be redesigned to incorporate new wood elements and upgraded amenities.

Other design highlights include exposed CLT ceilings and an abundance of connected outdoor spaces that will add nearly 4,000 square feet of outdoor amenity space atop the building. Glulam will be used for the beams, columns, arches and trusses; CLT will be used for the walls, floors and ceiling. Adding to the timber aesthetic are wood products from a variety of species including Douglas Fir, Spruce Pine Fir, Southern Yellow Pine and Hern Fir and Alaska Yellow Cedar.

On the sustainability front, Wright noted that D.C. is one of the most progressive cities when it comes to energy codes and green building.

Local officials, including the mayor, were eager to see the potential of a mass timber design, and Hickok Cole found value in sharing the carbon benefits of building with wood with municipal stakeholders. 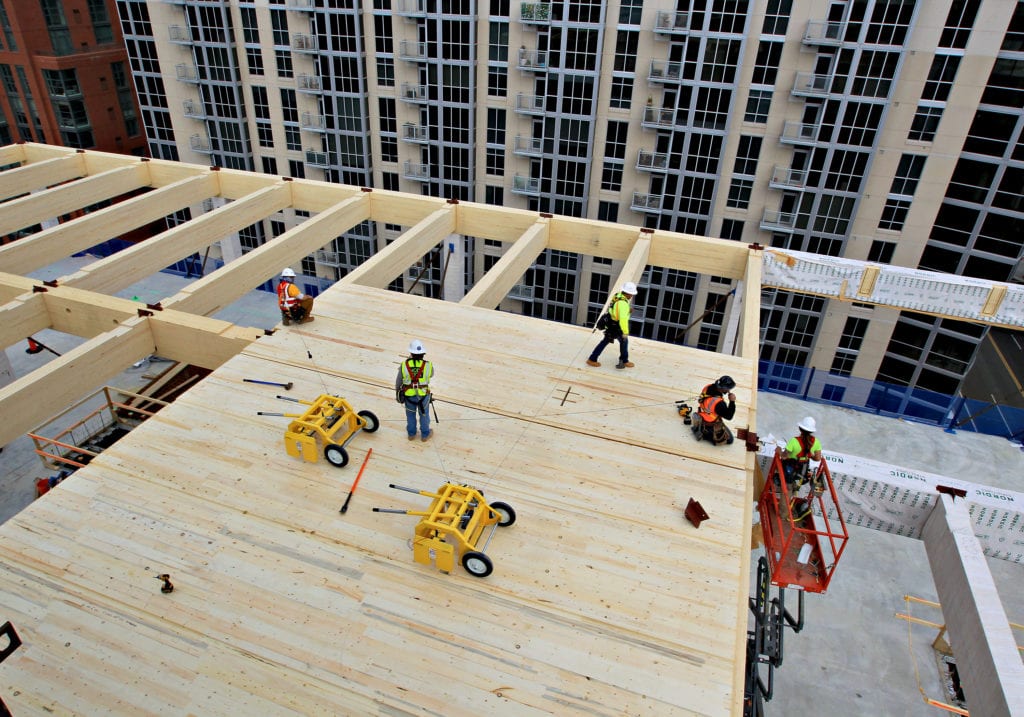 “Being able to tell those stories helped us push this project forward with the zoning administrators.” Per the project’s application, mass timber is capable of achieving a total carbon footprint equal to one-third of similarly sized concrete and steel buildings.

Current construction timelines estimate 80 M Street’s completion by mid-2022. In the meantime, Columbia is optimistic about the potential of the new addition.

“In addition to amenities like conference and fitness facilities, we’re going to have something that’s special and unique,” continued Keeley. “That has already resonated with a large tenant that has pre-leased more than 50 percent of the space. We’re confident in a post-Covid world that the best product will continue to do well, and that 80 M will represent the best product in the market.”

With this foundational project underway in the District, Hickok Cole anticipates increased interest in mass timber construction across their markets.

“We are at a point where we are having a discussion about timber from the get-go,” said Corrado. “We see the potential and we are introducing timber from day one. As more [timber projects] get done, it will show the owners a clear path from design to shovel in the ground. We’re going to see more of it delivered in all of our markets.”

Learn more about 80 M Street in this Q+A with Tom Corrado and Jason Wright of Hickok Cole.